Between 1981 and 1996, Chinati remained committed to realizing Flavin’s work and discussions continued intermittently. In the spring of 1996, Dan Flavin finalized the project’s design and issued certificates of authenticity, enabling work to resume. Between 1996 and 1998, Chinati’s staff raised funds and assembled a team to realize the project which was largely completed between 1999 and 2000. 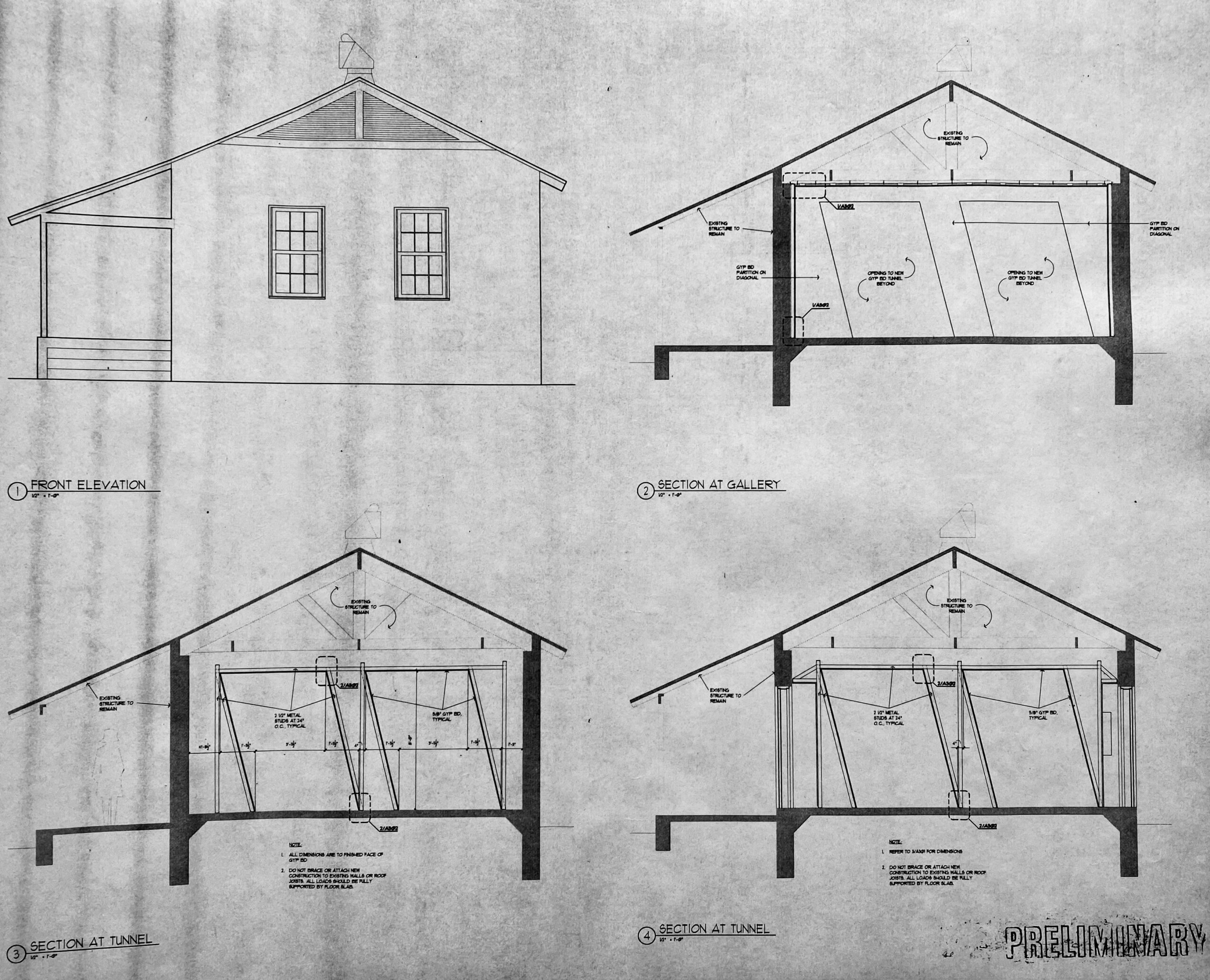 During construction, Architect John Gutzler wrote eleven field reports documenting all aspects of the project. The reports begin in August 1999 and conclude in October 2000 with a “final punch list” for the project. Drawing on these important documents and additional materials from Chinati’s archive, we retrace the realization of Dan Flavin’s work and explore important details of the design and construction.

In the early stages of the project, Ford Powell & Carson produced this architectural survey to document the existing conditions for each of the six Flavin barracks. Architects John Gutzler and Chris Carson assigned each building a nickname based on its condition. Several of the nicknames (e.g. “Treeville”, “Highboy”) refer to distinguishing characteristics of the buildings’ courtyards. The nicknames also reduced confusion created by inconsistent and diverging numbering systems for the buildings that dated back to the fort era. (For more on the building numbers, see the next section)

According to Architect John Gutzler:

Note: It is likely that the Chamberlain piece was moved there in October 1981, based on this note in the corresponding activity report:

In August and October of 1999, significant demolition was completed, including the removal of metal roofs, jackhammering and removal of interior concrete floors, demolition of walkways and steps, and removal of plaster ceilings and retaining walls.

Note: Beginning in October 1999, Ford, Powell & Carson used a south/north numbering system for the buildings, which is the opposite of the numbering used in the 1998 Existing Condition Plan above, and how the buildings are referred to now (Flavin 1 – 6). During the Dia era, the Flavin barracks were numbered 5B – 10B, according to a north/south numbering system that included all U-shaped barracks – not just the Flavin ones. In that system, Flavin’s project did not include the 11th building and did include the building that is now the special exhibition space. 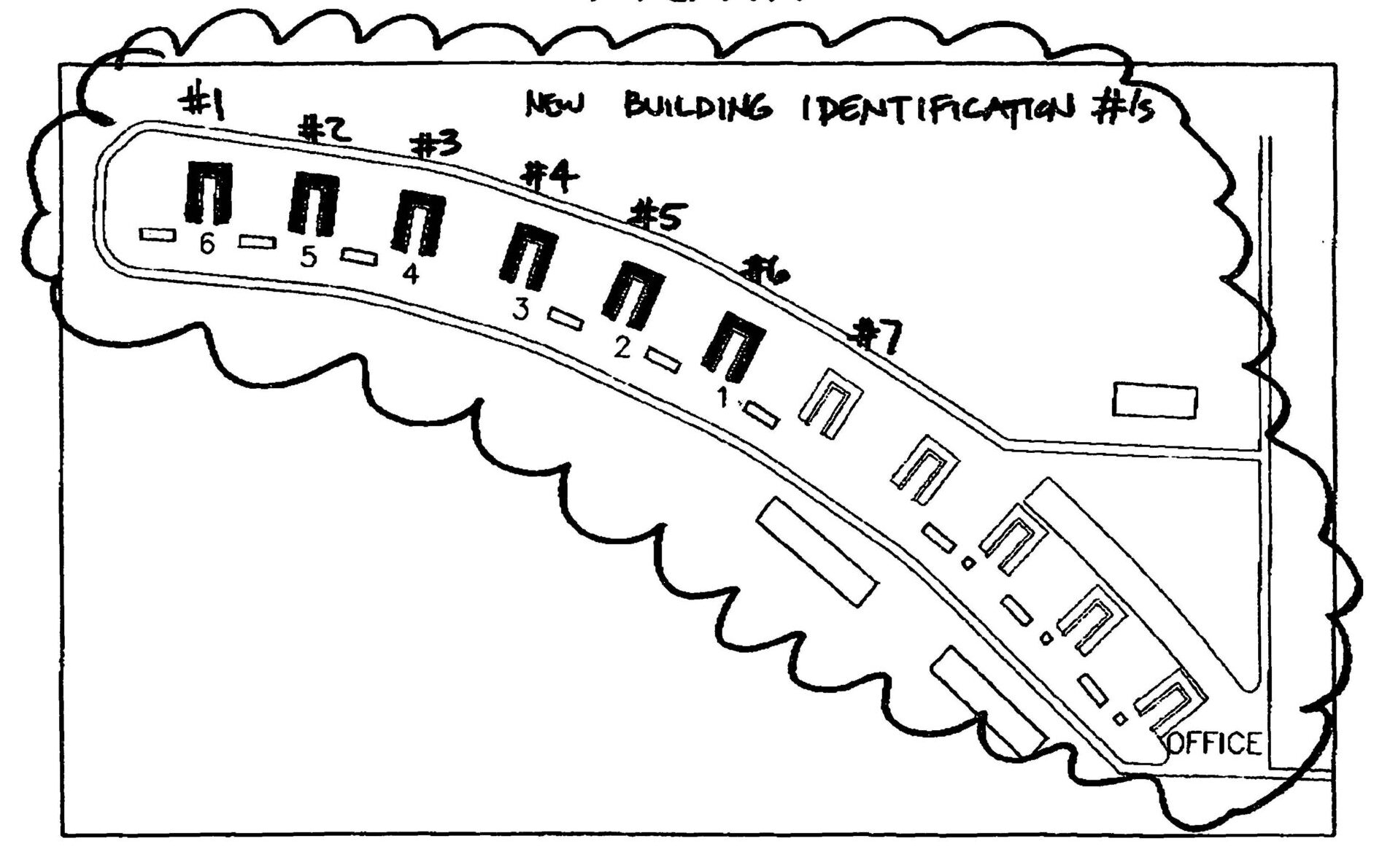 During this first phase of demolition work, the tunnel structures in buildings 6 and 2 were mocked up. The images below capture this work in drawings and photos. 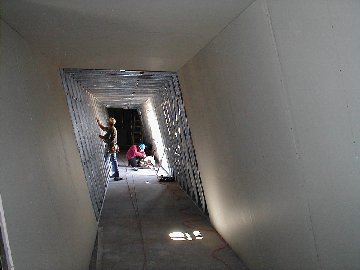 Beginning in December 1998 and continuing throughout 1999, several options for wheelchair accessibility were explored for the Flavin barracks: 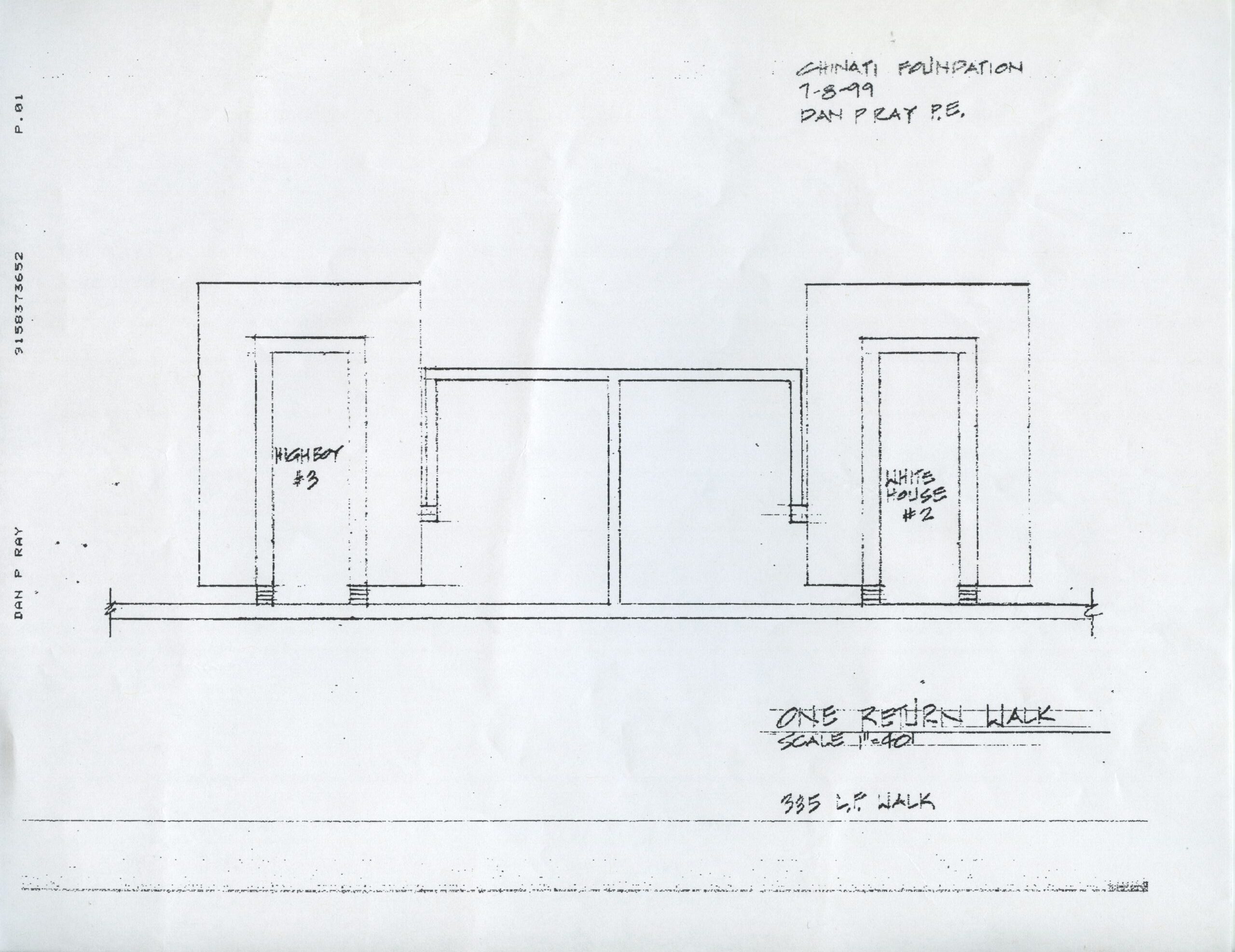 This “one return” design was proposed in September 1999 along with the “two return” design below. One aspect of this proposal – entering via the outer doors, rather than the courtyard doors – was carried into the final design. 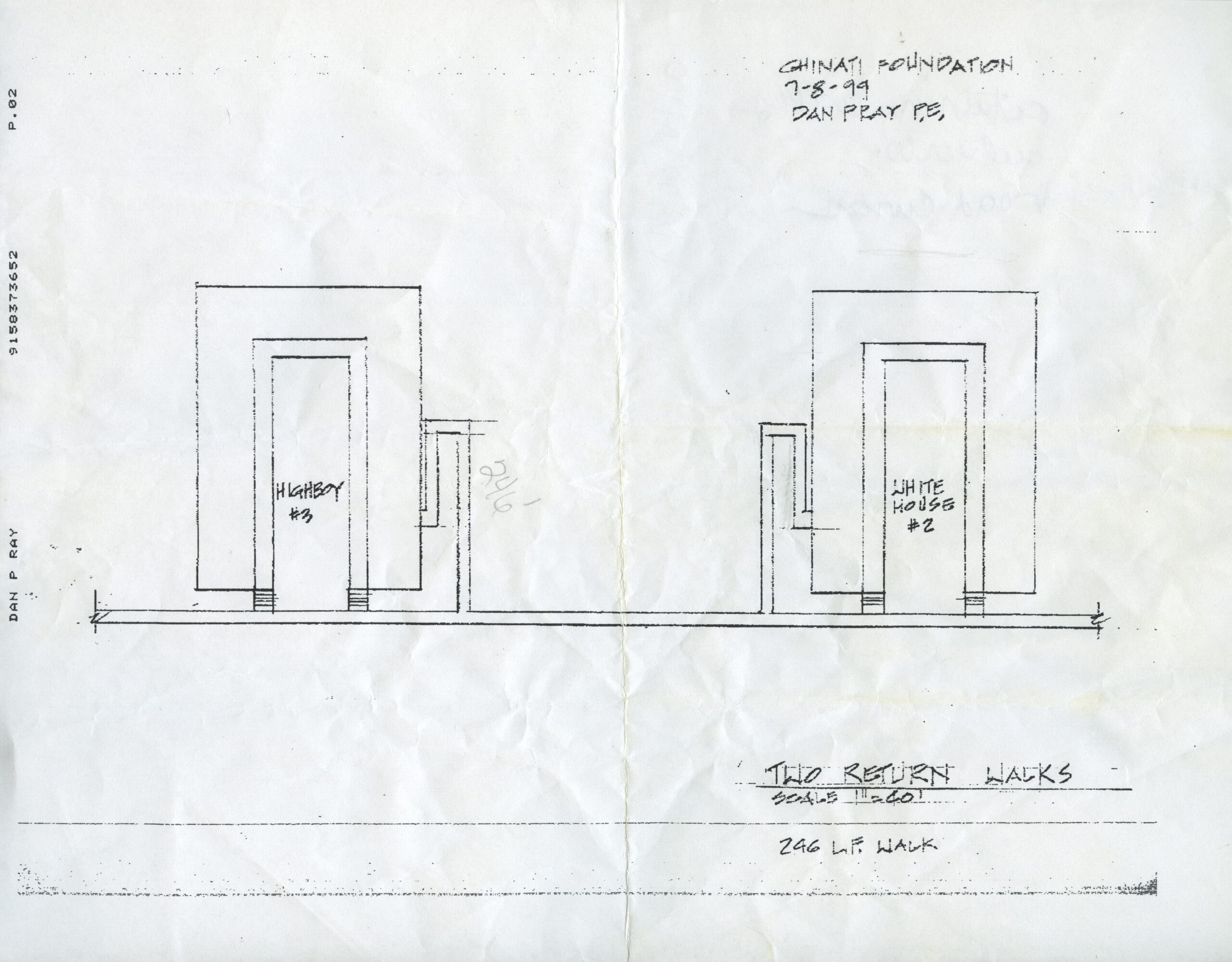 The design below proposes a T-shaped walkway by which visitors enter from the east sidewalk and double-back when exiting each arm of the building and the courtyard. Given the mandate in the November 1999 field report that “existing trees [are] to be saved and protected”, this design only worked for some of the courtyards. 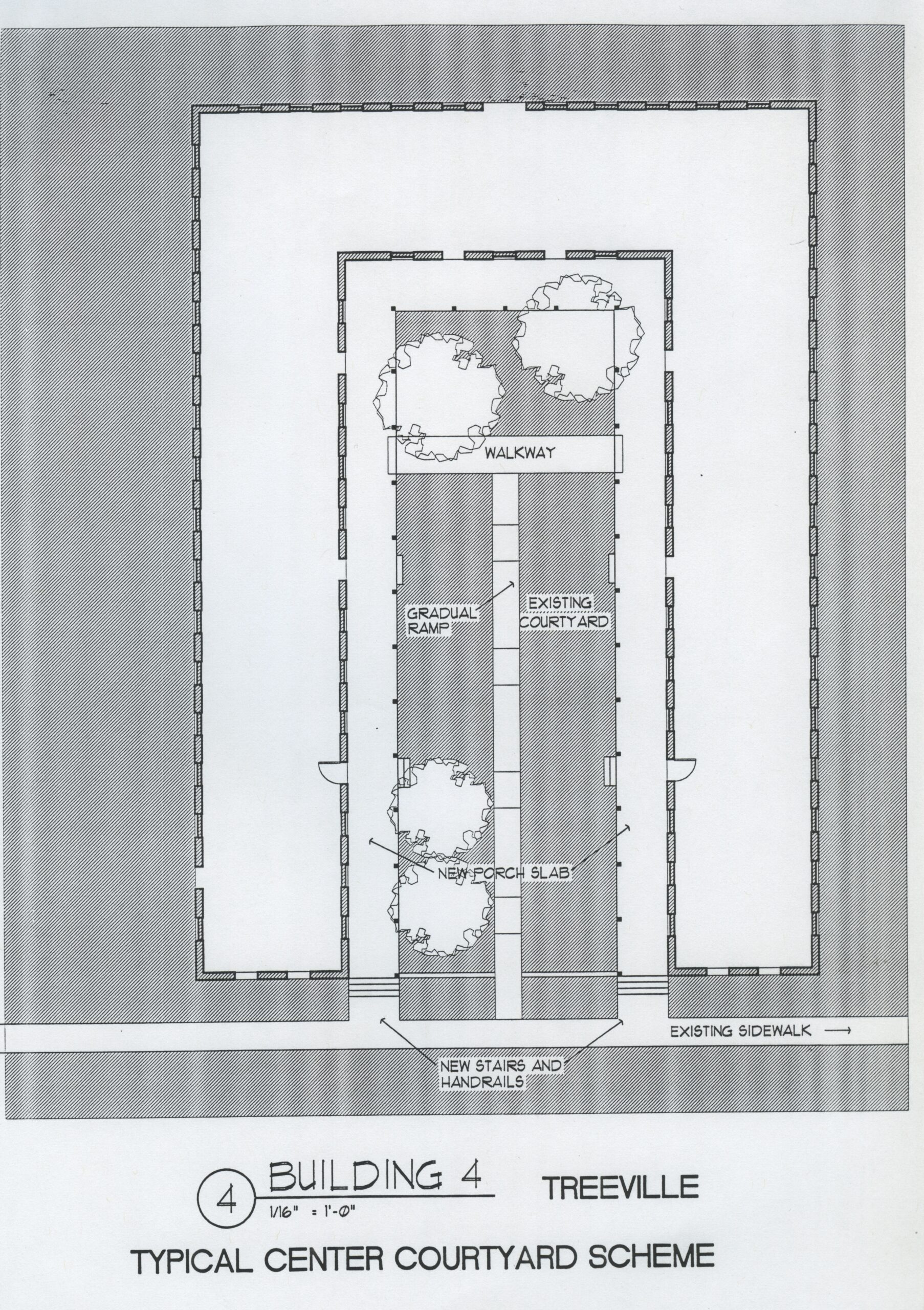 Because the T-walkway only worked for certain courtyards, a southern ramp design (below) was proposed as an alternative. 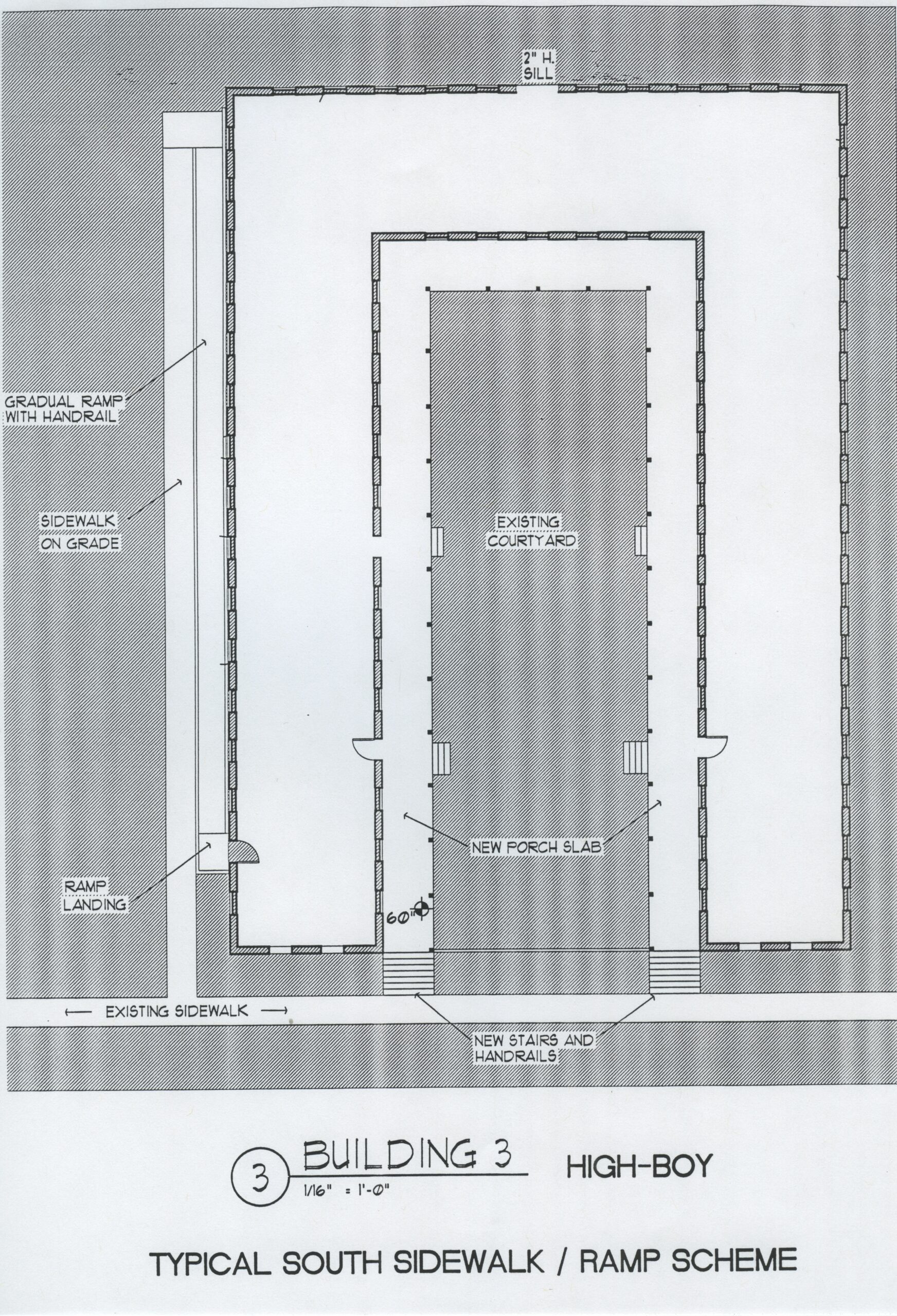 Both of these designs were rejected in February 1999 citing a desire to preserve “visual continuity and to keep the courtyards free of structural elements”. Chinati staff proposed the design below, which is the one in place today. Wheelchair access is available via naturally sloping ramps originating from the west sidewalk, allowing access to one side of each building via an outside door. 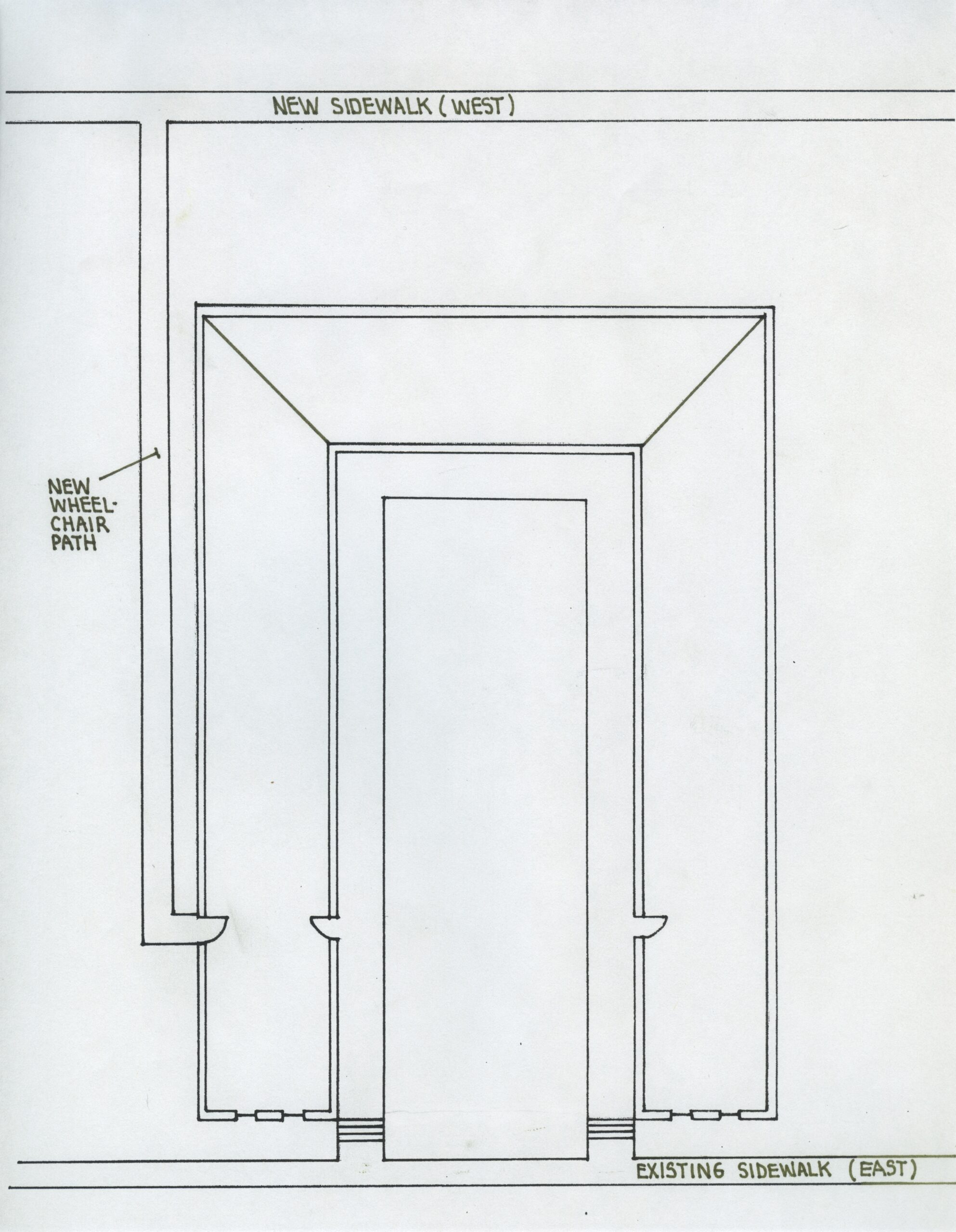 2000 April - Installation of the Fixtures

The field report dated April 3, 2000, notes that “Steve Morse coordinated installation of the first 3 fixtures today” and in a further note for Building 4 (now Flavin 3) that “Light fixture installation [is] underway with Steve Morse / James Cook / Electrical sub-contractor”. The image below shows similar work happening in subsequent weeks in one of the buildings with an “endbarrier” corridor type (Flavin 2, 4, or 6).

In his work at Chinati, Dan Flavin uses the unique U-shape of the barracks buildings to create corridors and barriers of light. Though corridors and barriers had long been part of Flavin’s practice, the 76-degree tilt of the lamps in untitled (Marfa project)  was more difficult to build than previous pieces and produces a more complex visual effect.

“Flavin’s untitled (Marfa project) is carried by four colors – pink, green, blue, and yellow – distributed throughout six buildings with two corridors apiece. The buildings form pairs with respect to the placement and colors of the lamps. In the first building, the lamps are placed in the middle of the corridors, in the second building they are placed at their ends, in the third building in the middle again, and so on. Each pair of buildings uses one set of colors: pink and green in the first, blue and yellow in the second, and all four in the last. This arrangement emphasizes their layout, asymmetrical in the buildings with the centrally installed lamps (centerbarriers) and symmetrical in the corridors with the lamps at the end (endbarriers).” — Marianne Stockebrand, “Dan Flavin untitled (Marfa project) 1996″ in Chinati: The Vision of Donald Judd, second edition, p.231. 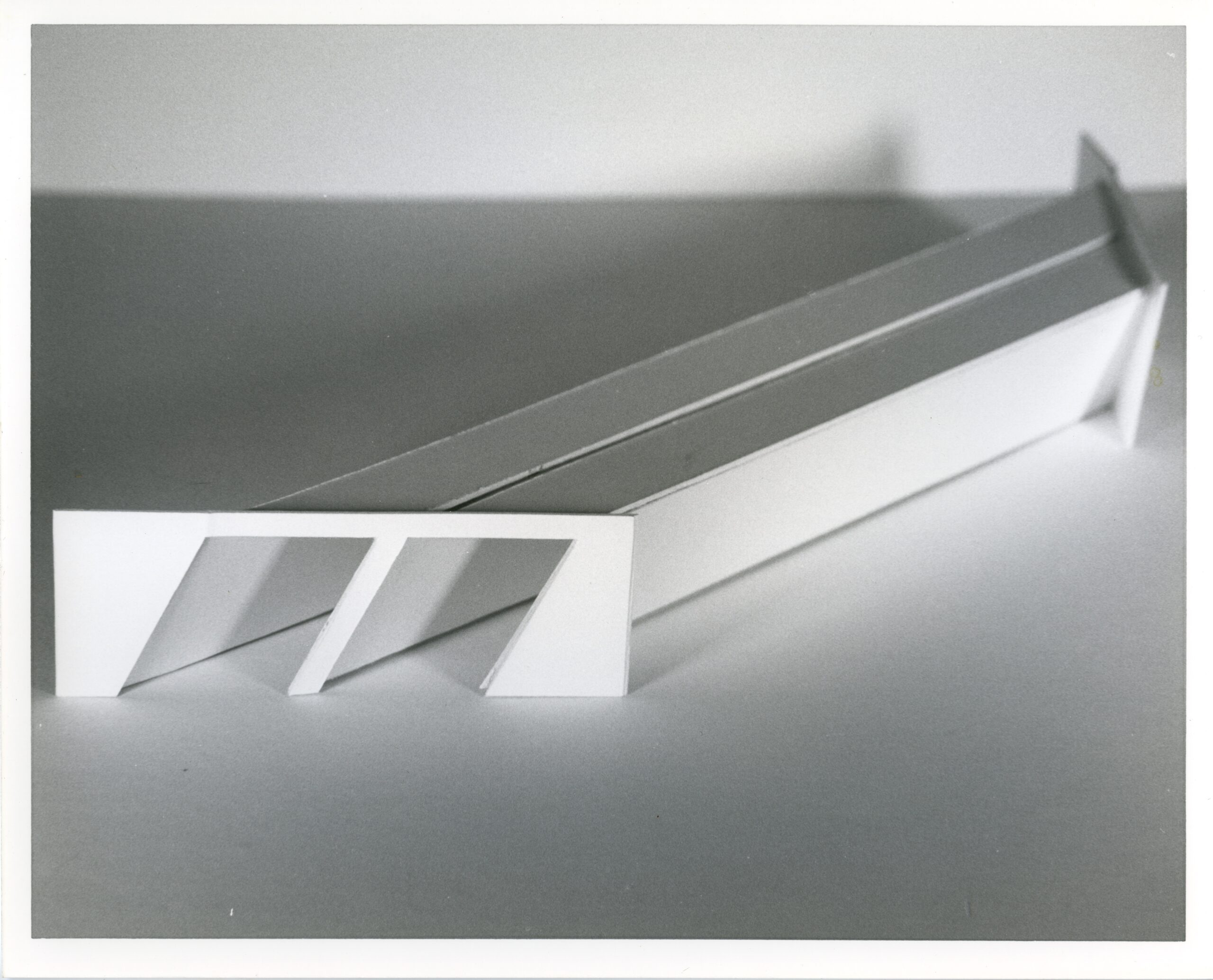 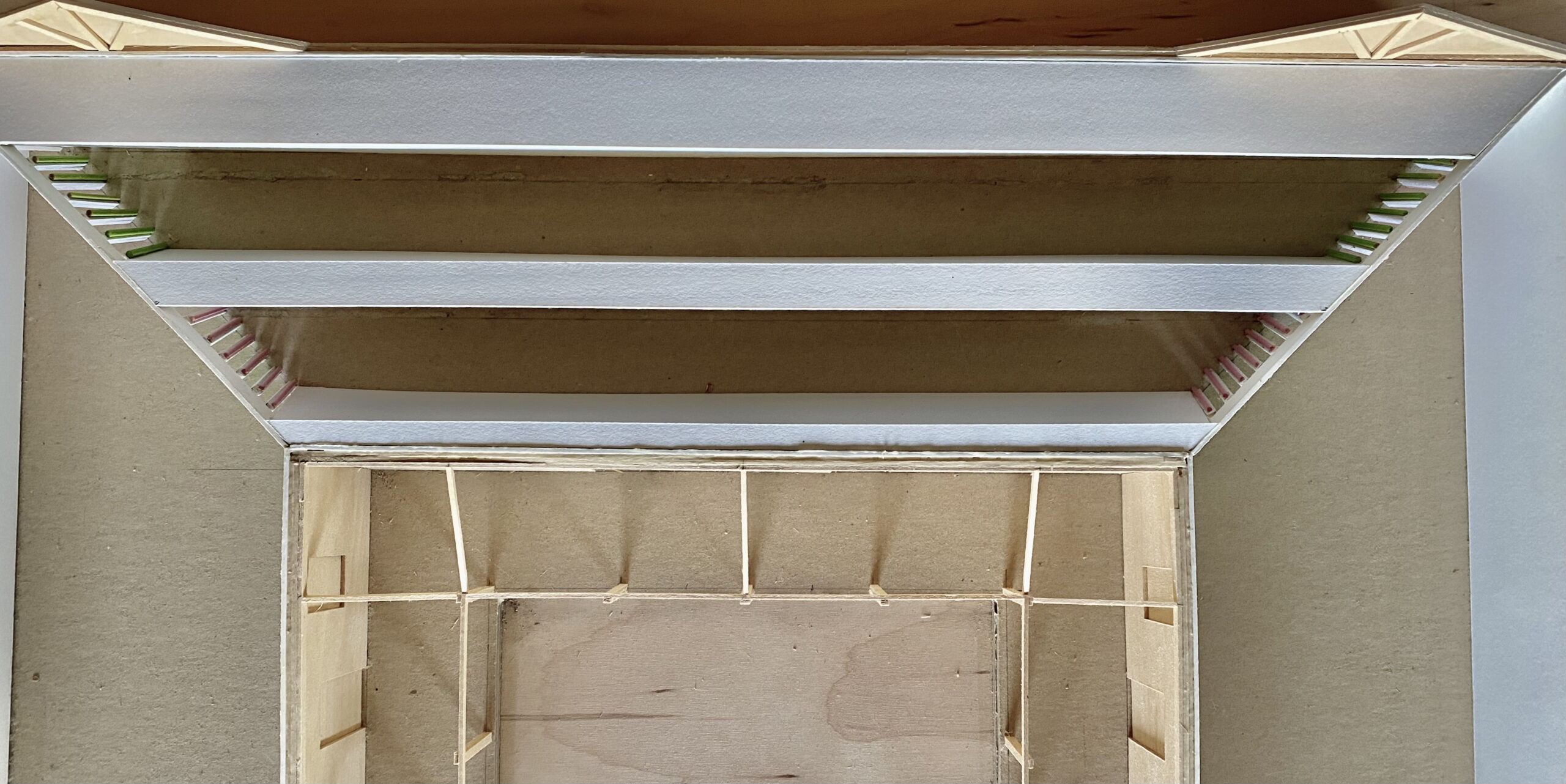 Here you can see the model for Flavin building 2, with the “endbarrier” corridor (above) and the realized form (below). 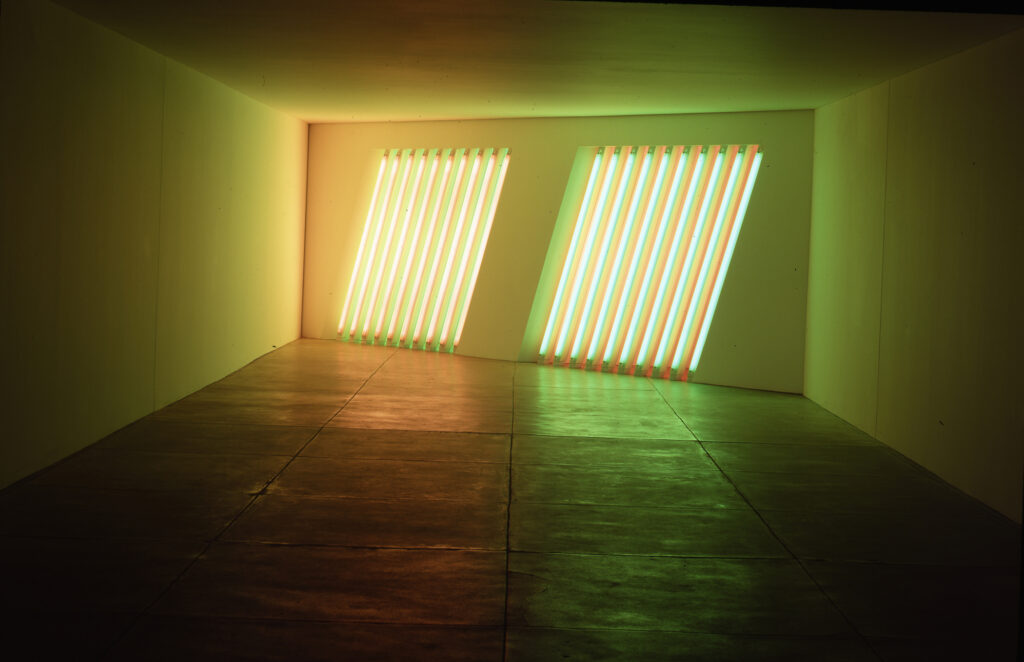 Below you can see the model and realized form for Flavin building 3, with the “centerbarrier” corridor: 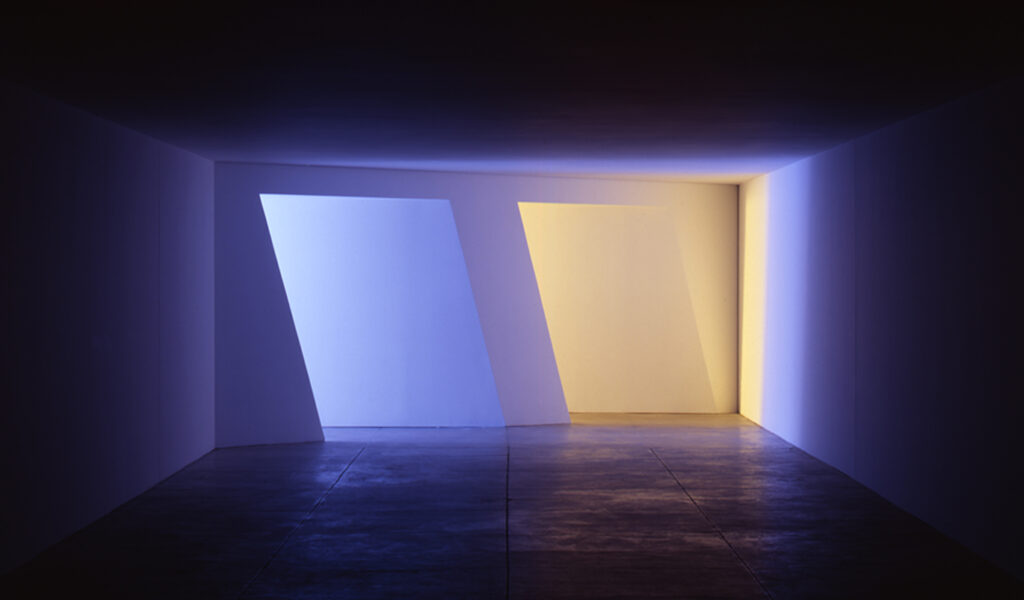 While there is great visual consistency among the U-shaped Flavin buildings, each building is unique. A particularly distinct element of each building is its courtyard, which includes an assortment of trees, shrubs, flowers, and grasses.

The courtyards are best experienced in person, but the drawings and photos below present some of the key differences in the layout, flora, grading, stairs, and views from each: 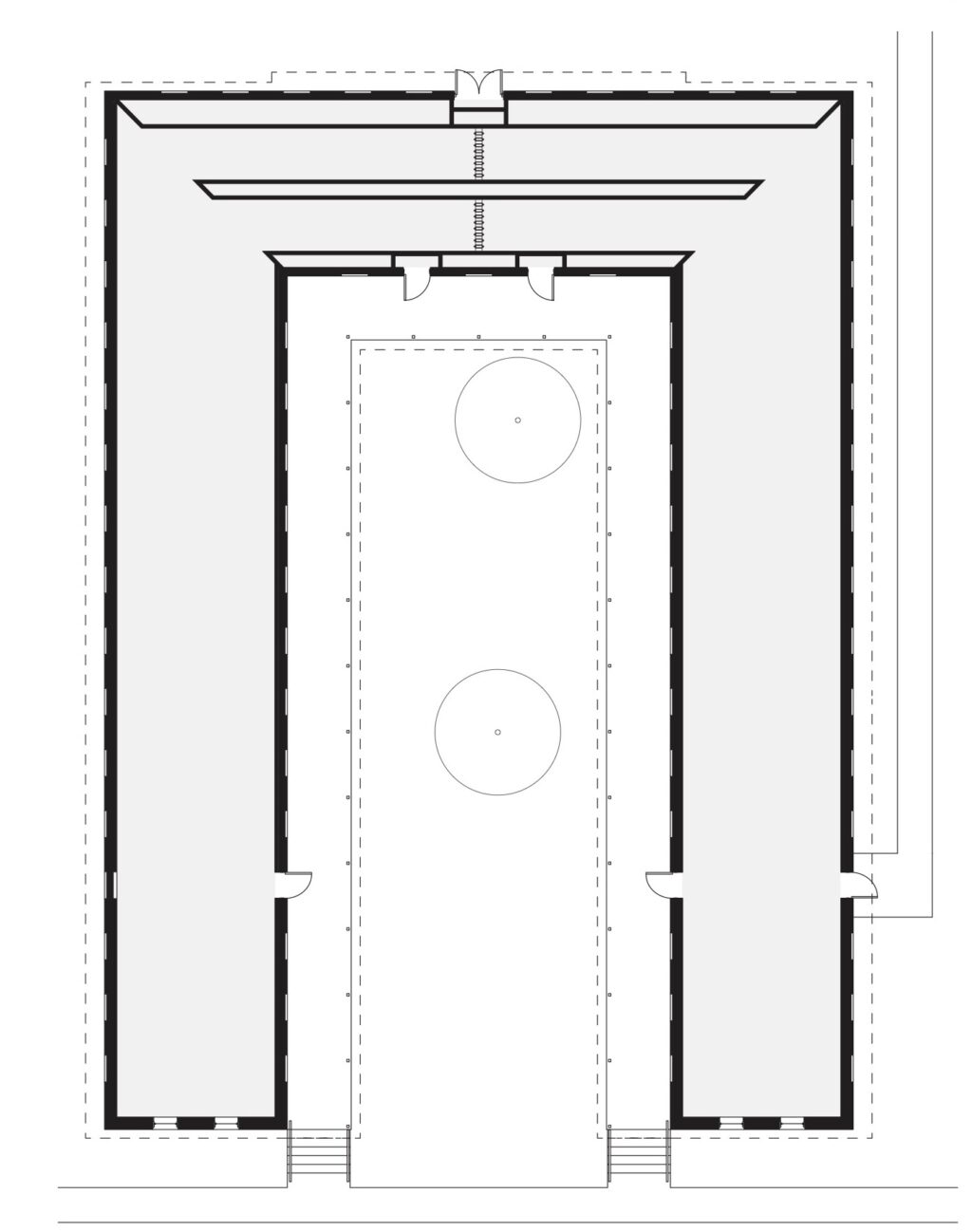 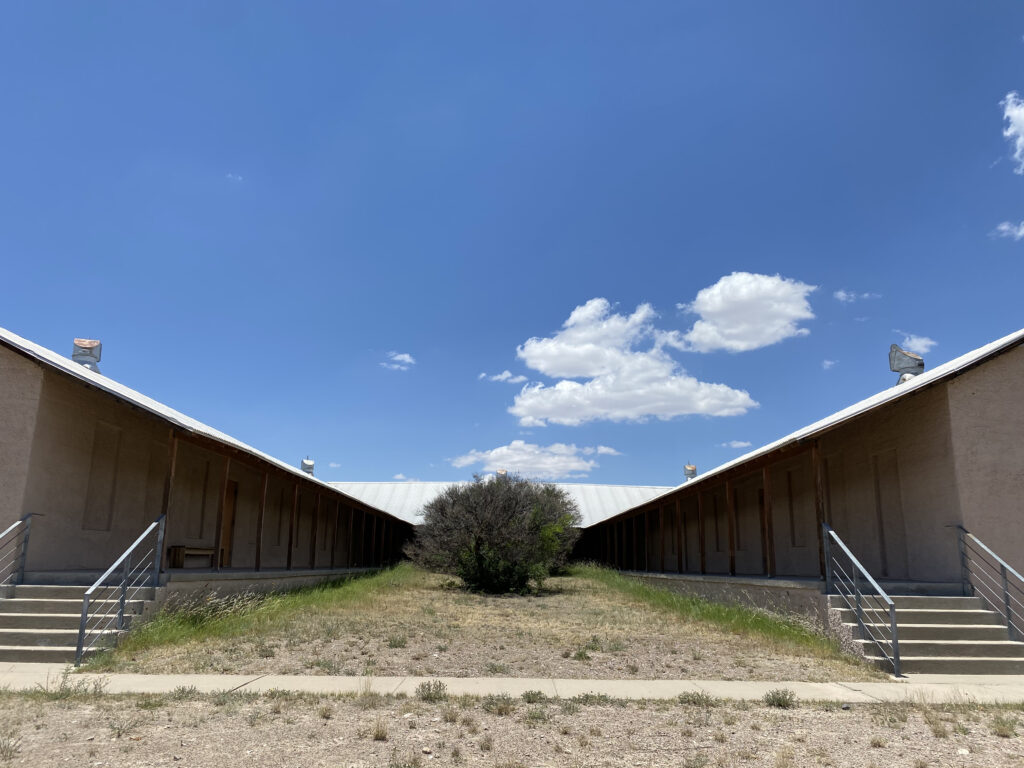 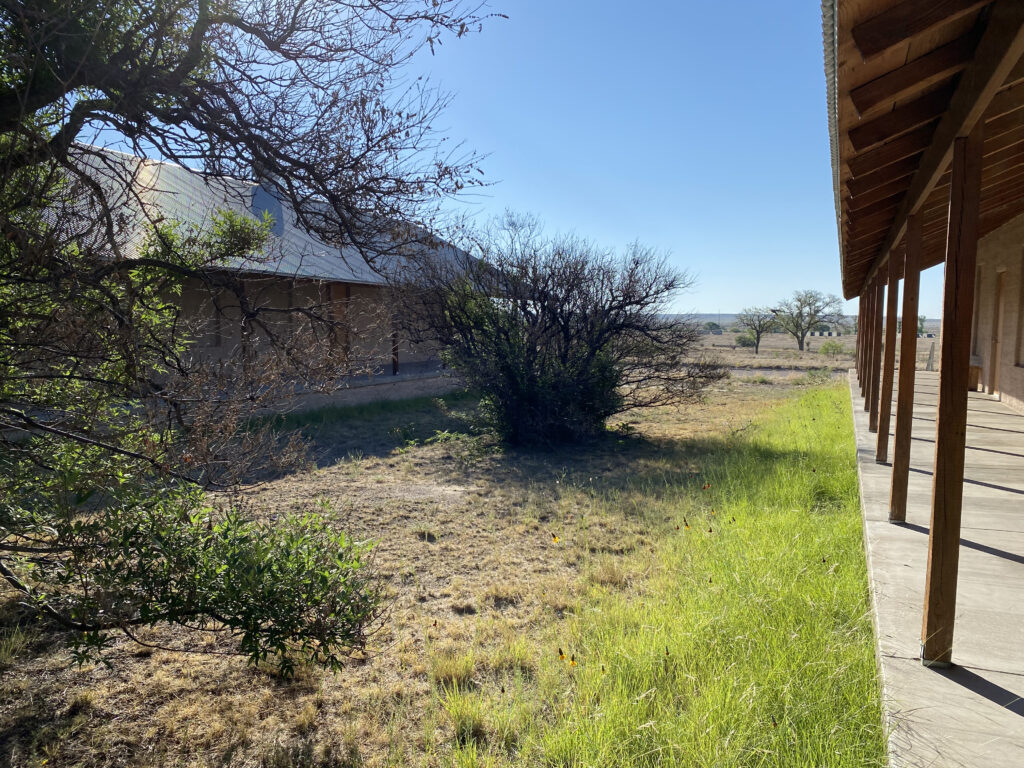 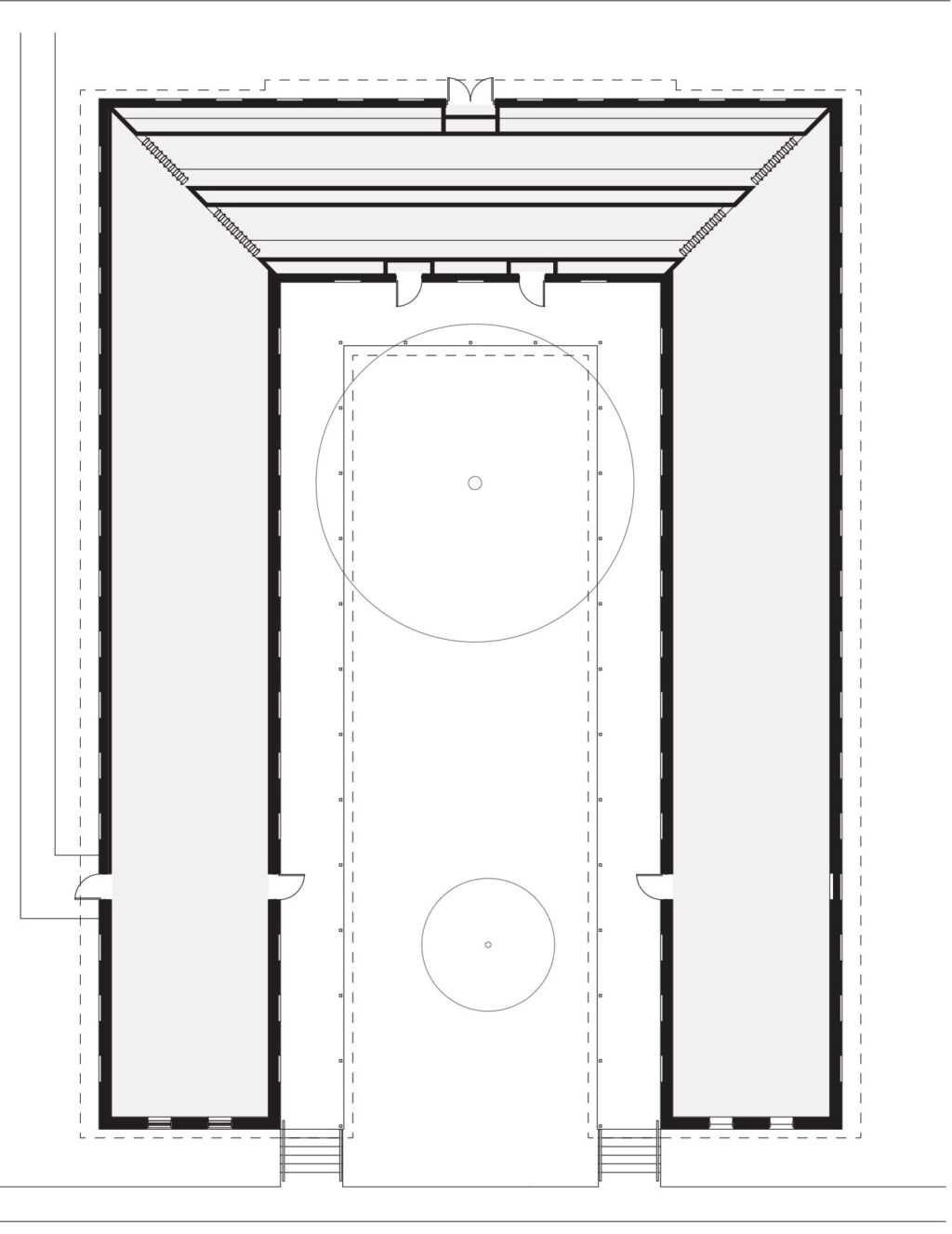 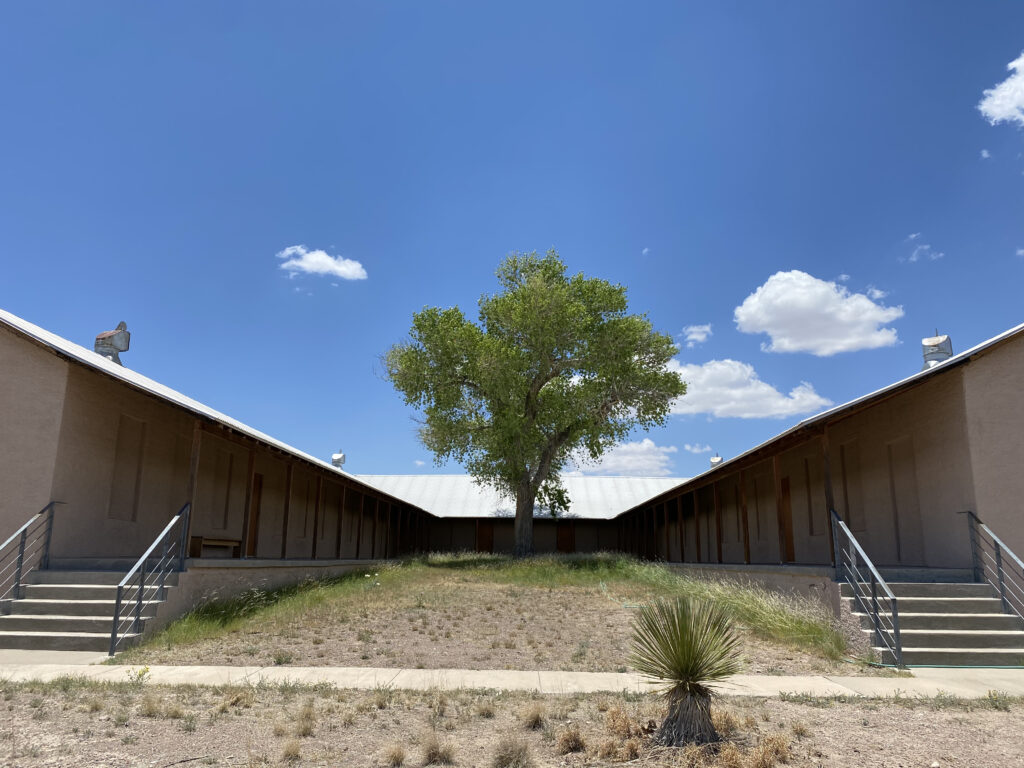 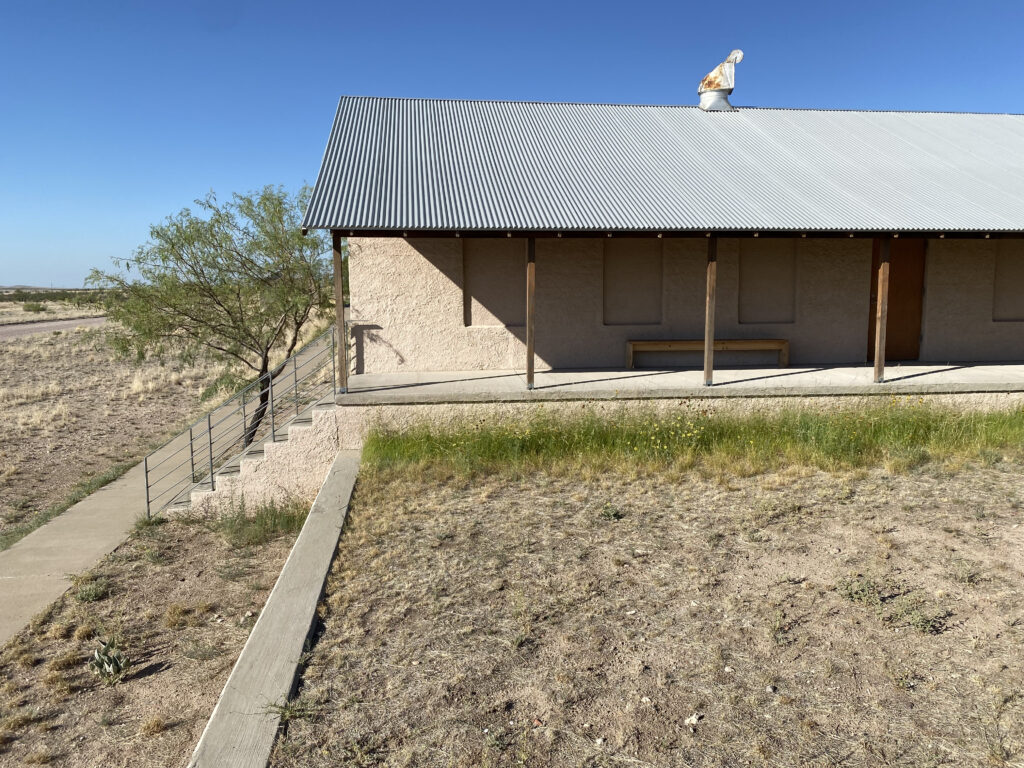 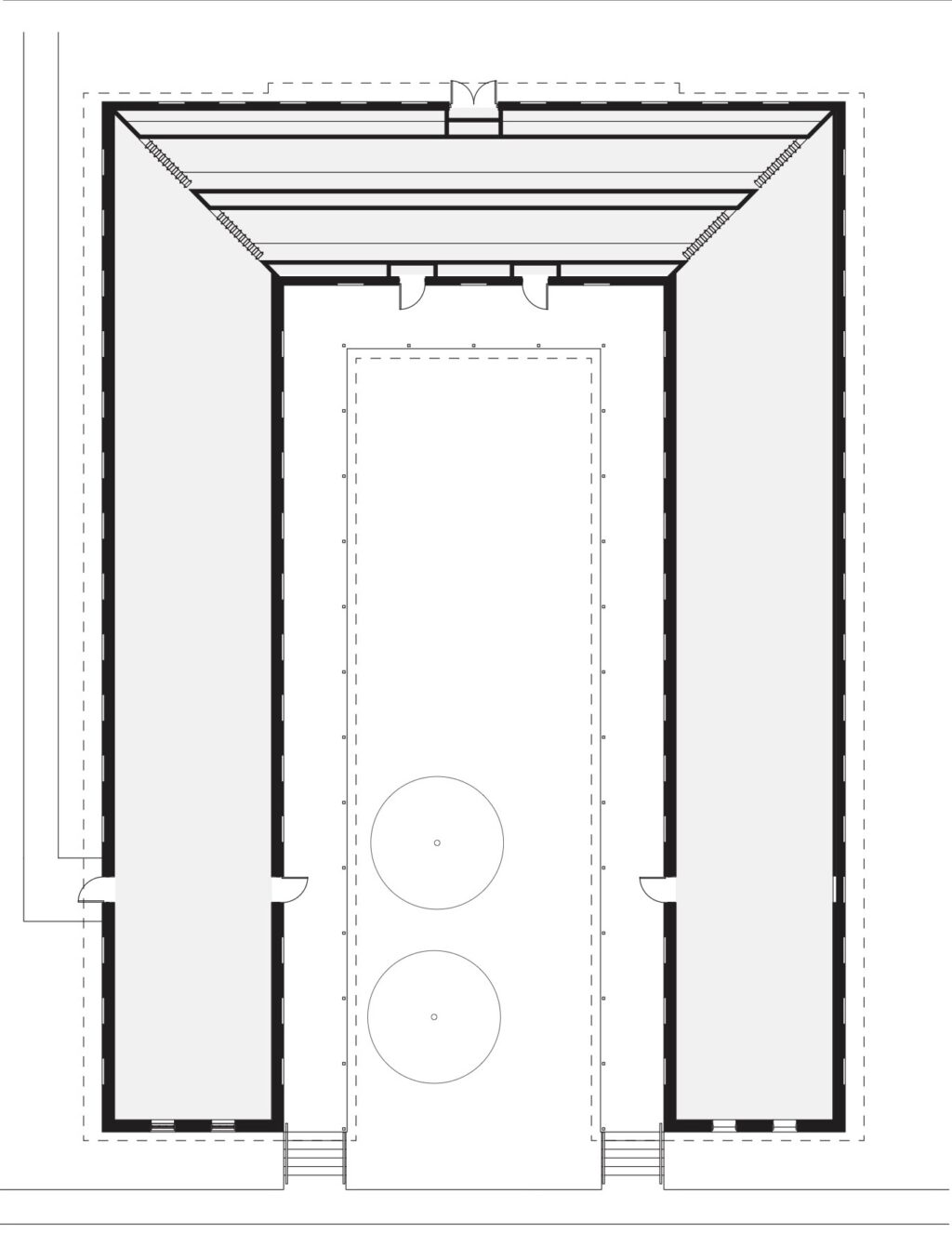 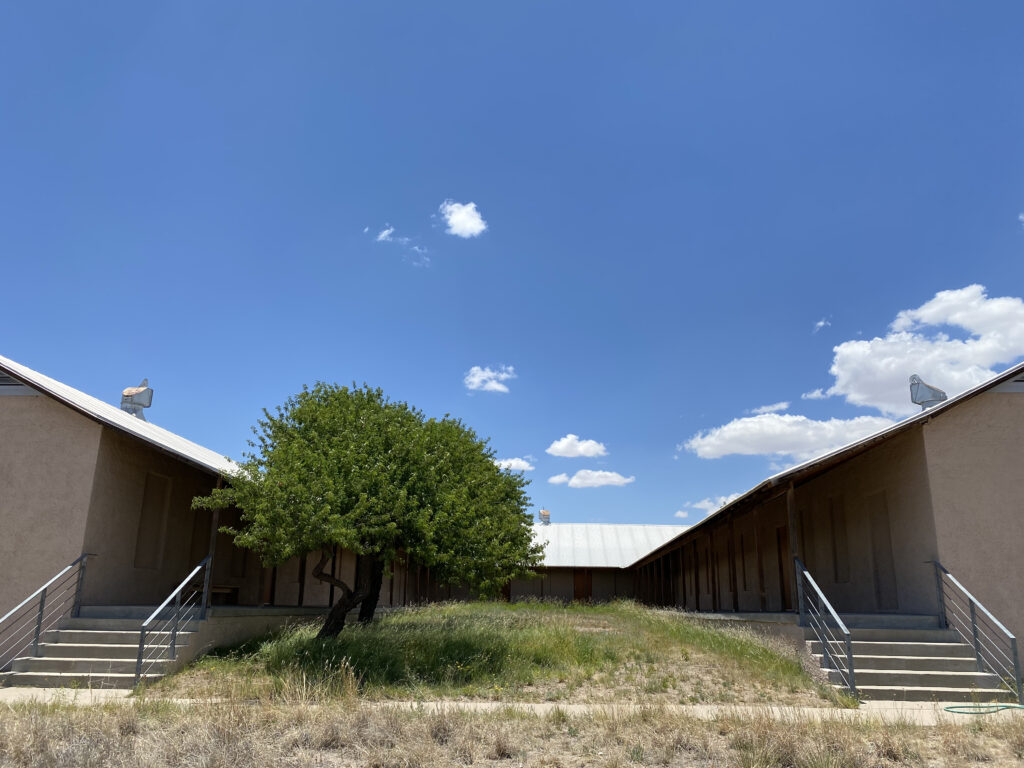 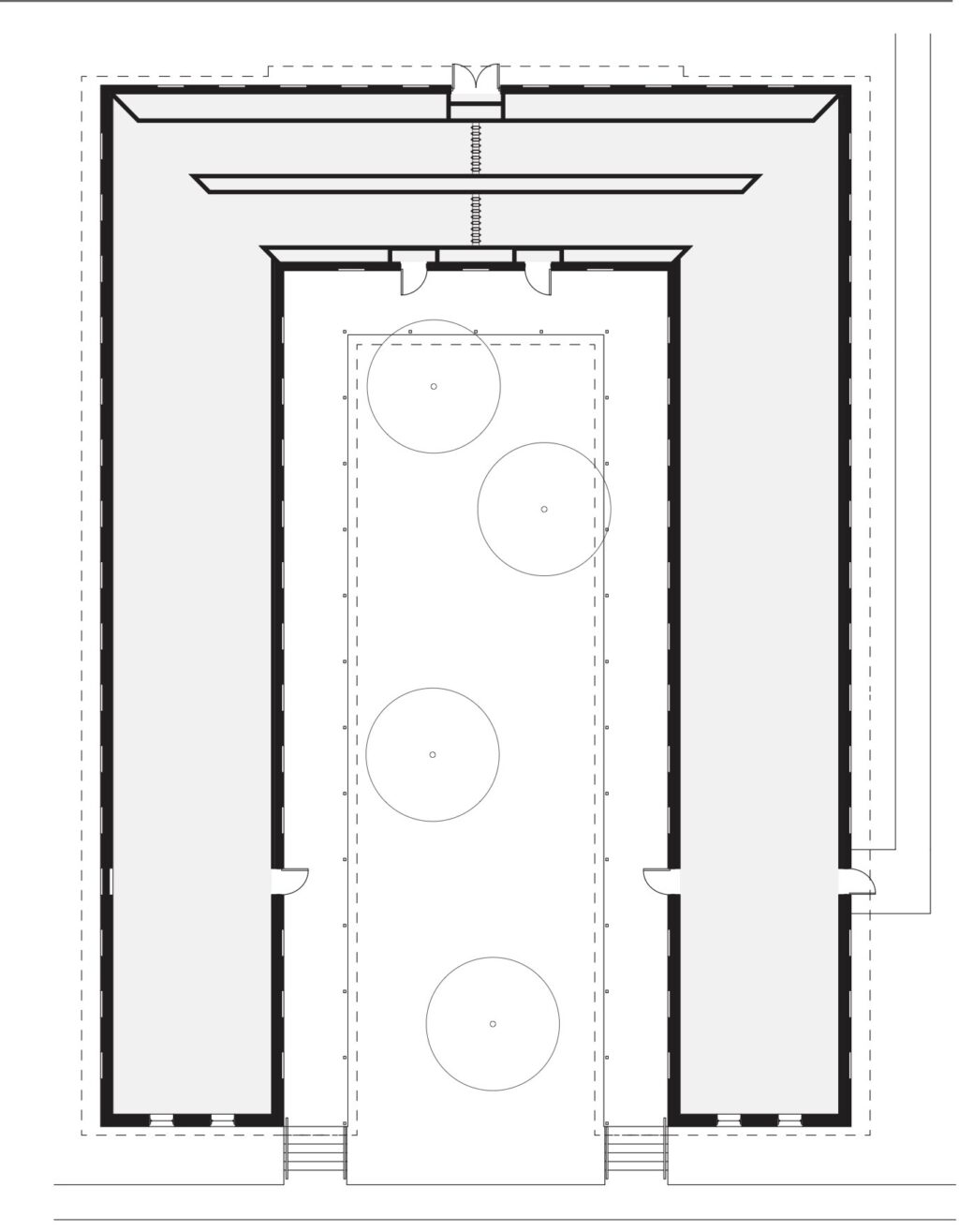 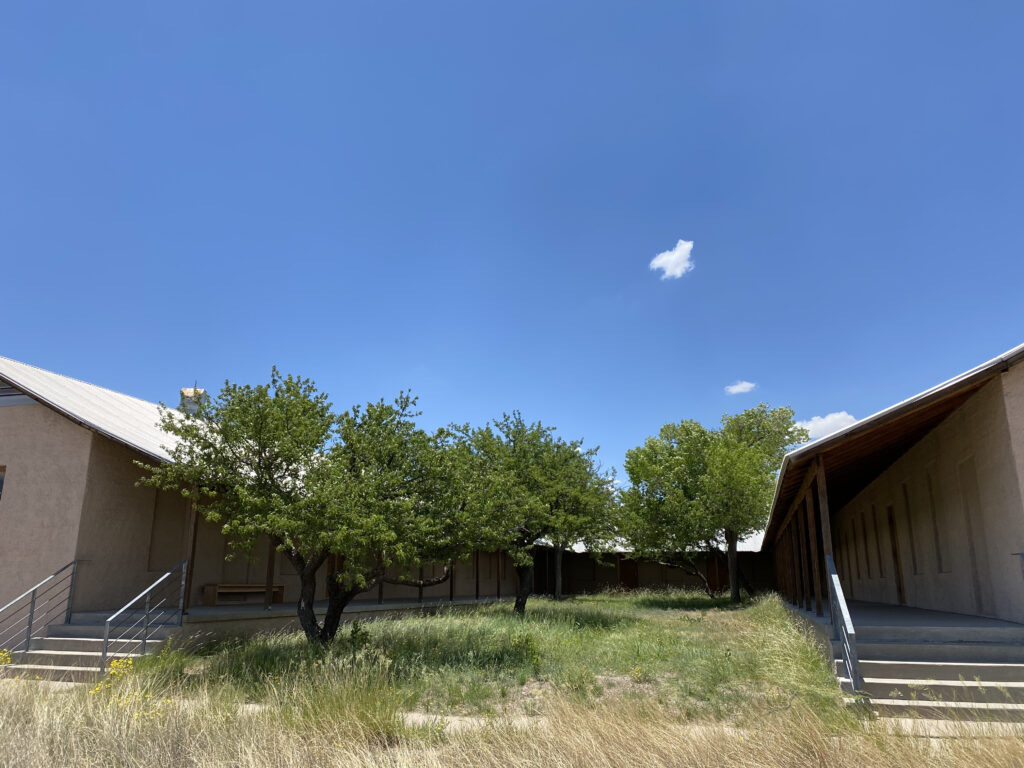 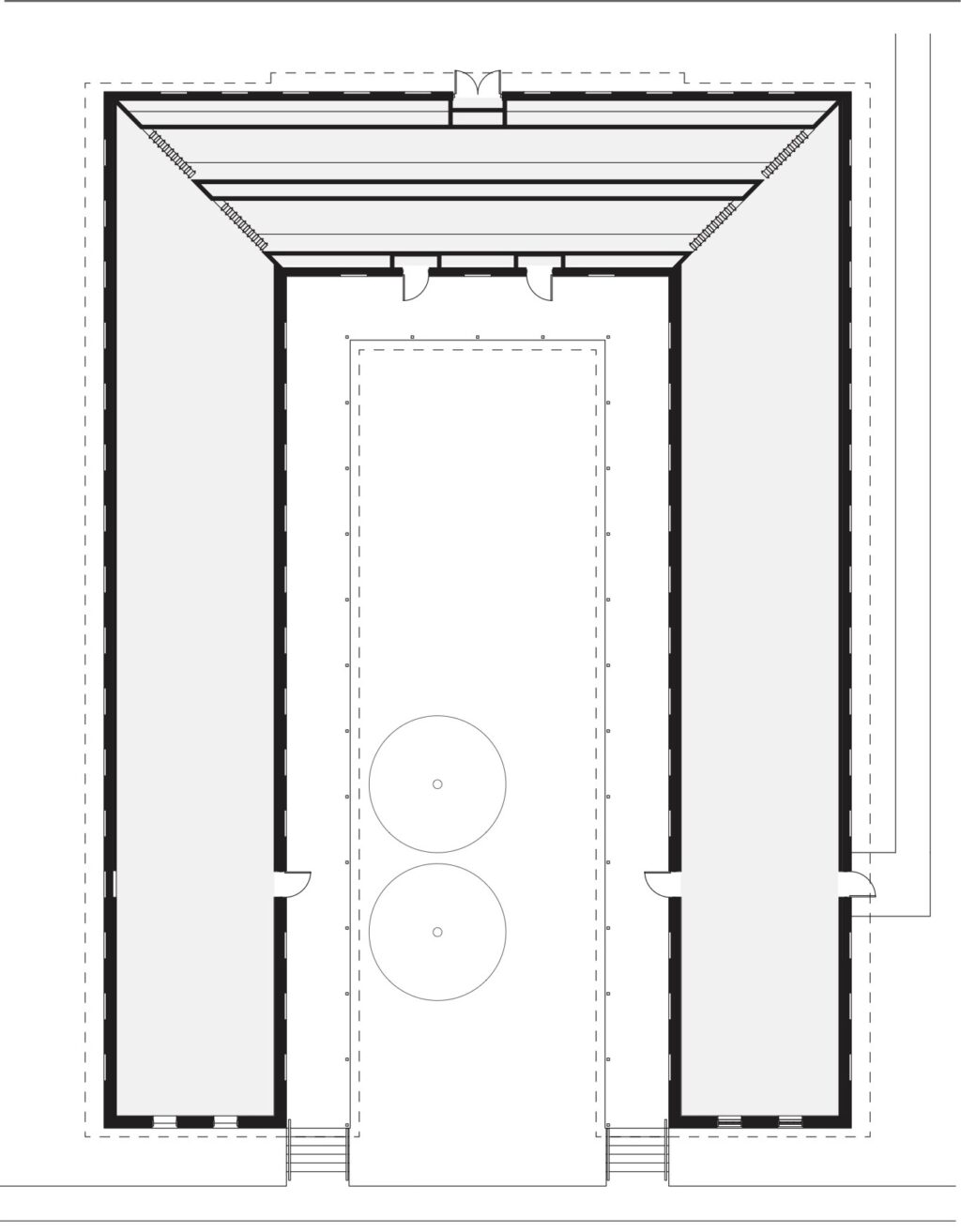 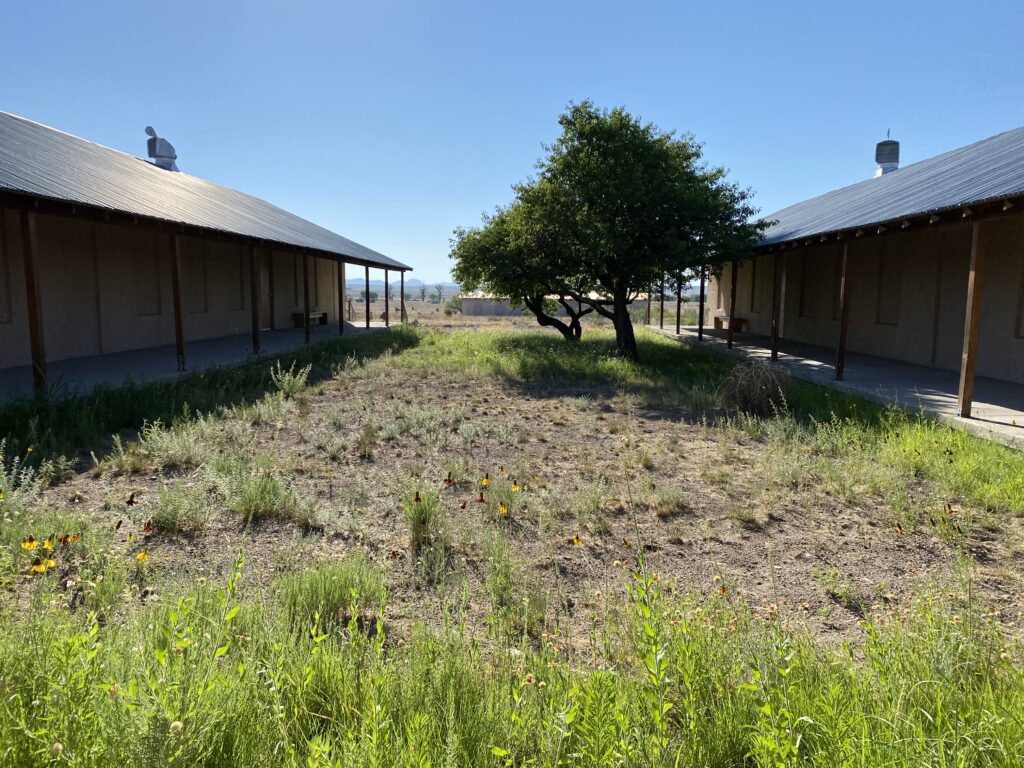